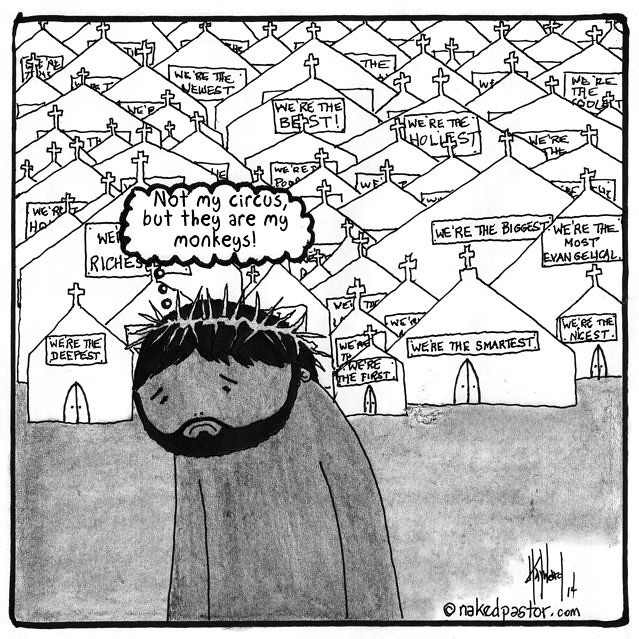 July 22, 2016
Let’s be thankful for the safety net Christianity provides to those who are lost and or need healing with no where to find help! For children of any age the stories and parables are teachings for the paths of life. An example is this one: “Most assuredly, I say to you, he who does not enter the sheepfold by the door, but climbs up some other way, the same is a thief and a robber. But he who enters by the door is the shepherd of the sheep. To him the doorkeeper opens, and the sheep hear his voice; and he calls his own sheep by name and leads them out.’’
On the other hand are those who are like ‘monkeys’ forever playing on the net as safety from seeing that they’ve become proselytizing idolatry worshipers that need to recruit all to their way of thinking, and being saved for not to be thrown into the eternal vat of hell (yi-yi-yi)! They are like hybrid human-monkeys who see, hear, or speak nothing that isn’t scripture while denying that they are closed minded to hearing anything, no matter how sensible that doesn’t come from the many different versions of the bible.
One of the many things I learned while working on Wall St. with some of America’s most educated and terrific people, was that they rarely bragged about what they knew, and NEVER about religion. They, with few exceptions, walked the  talk of hard work, etiquette, and open, creative mindedness. Like with any group, there were rare exceptions that used their positions negatively. To be in silence about your religion or spiritual  leanings is always admirable and represents etiquette unless someone requests it.
Christianity lived the right way in the heart and with positive actions can be wonderful, but many make the ‘net’ their pulpit to annoy those who have no interest. Christian etiquette is to use ‘skillful means’ in your ‘own words’ and actions without reference to being like a ‘monkey on a string’ with a one track mind that gets offended by open thoughts. Other than with the quiet christian who has the etiquette to use their own words in conversation, most Christians are easily offended by open talk that doesn’t fit within their set of memorization of a 2000 year old book of parables that were never meant to be taken ‘literally’, even when the meaning of words have changed.
Loving a Jesus is easy for those that can’t even find the love within. When the rare one does, the attachment to any religion, superstar of religion or spiritual being becomes an after thought. Love is the way and the salvation of a life blessed with the inner knowing and recipe of the highest values and actions. Staying in the ‘locker room’ and learning all the plays better than those on the field, are those who miss the love of the game of life. Pray in silence; quote scriptures in your heart; meditate in silence; love in silence!
Arhata~