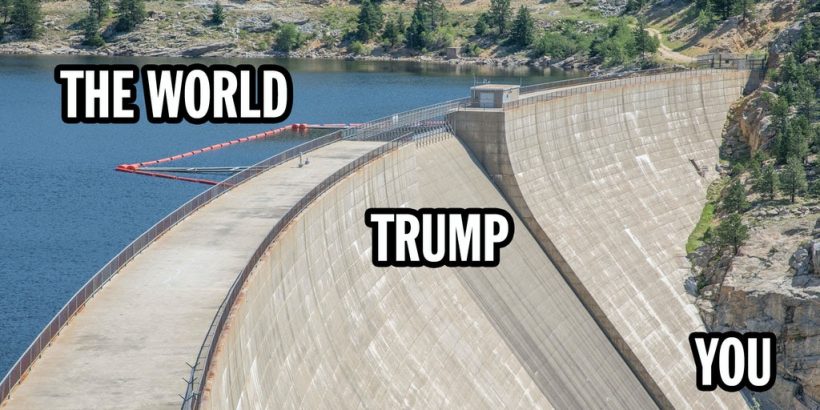 Donald Trump is all that stands between We the People and an increasingly intolerant world.

Perhaps you’ve noticed: The world ain’t what it used to be — at least not for folks of a particular political persuasion.

There was a time, not too long ago, when we on the Right could proudly support our president even while the other side dismissed him as a “B” actor, a warmonger, and an “amiable dunce.” More recently, we could confess to having thrown a lever for Chimpy Bush Hitler and still be accepted in polite company. Today, however, try telling folks outside your circle of friends that you voted for the Orange Guy. And that you’re voting for him again this year.

Free speech and populism used to be popular among Democrats. Theirs was the party of blue-collar America, after all. Macomb County’s “Reagan Democrats” were, in fact, Democrats. Republicans? They lived in Grosse Pointe and in the tony northern suburbs, while the Democrats lived downriver. These Republicans thought “business casual” meant leaving the diamond cufflinks in the dresser drawer, and their elected representatives used Queensbury Rules to fend off a sucker-punching press.

Since then, the parties have done a switcheroo. Not a fake one, like the Democrats say happened in the Civil Rights ‘60s, but a real one with real consequences. The culture and the counterculture have switched sides, and there’s no denying it. Democrats are now the elites, the paternalists, the Chardonnay-sippers, the theater-goers, the media darlings, the foundation favorites, the advanced-degree types, and the party preferred by Wall Street. Republicans, on the other hand, have welcomed in the workers, the grinders, the hog butchers, the middle-managers, the guys and gals in the field and on the shop floor. The Republican party is diverse, but the common thread is Patriotism. We love our country, and we don’t apologize for it.

We’re okay with this rearrangement, too, because we know we’re riling up the right people. As our Thomas Gallatin noted recently, “Hillary Clinton once again reminded everyone why she was such an odious and unlikeable candidate. In comments resembling her infamous ’basket of deplorables‘ slander from 2016, Clinton went low, accusing most elected Republicans of being ‘cowards’ and ‘spineless enablers’ of President Donald Trump. ‘Most Republicans are going to want to close the page,’ she asserted without evidence while robotically botching the metaphor. She added, ‘They want to see him gone as much as we do, but they can’t say it publicly.’”

Suffice it to say: We want to be taking fire from the likes of Hillary Clinton. When she calls us deplorables, we take it as a compliment.

A vote for Donald Trump is thus a vote for the resistance. However quietly or noisily, when we support the president, we become dissidents, revolutionaries, anti-establishment types. Even if you’re disinclined to grab a torch or a pitchfork, there’s something inside you that’s looking around and wondering how we got to this awful state of affairs; something inside you that feels like a young John McEnroe at stodgy old Wimbledon. Joe Biden for president? You cannot be serious!

As National Review’s Rich Lowry put it in a piece perfectly titled The Only Middle Finger Available, “Besides the occasional dissenting academic and brave business owner or ordinary citizen, Trump is, for better or worse, the foremost symbol of resistance to the overwhelming woke cultural tide that has swept along the media, academia, corporate America, Hollywood, professional sports, the big foundations, and almost everything in between.”

Yes, you’re now part of the counterculture. And the old counterculture of the ‘60s has become today’s de facto culture. Think about it: The free speech movement began among long-haired college kids in the mid-1960s, and now free speech (along with freedom of religion and freedom of the press) is under withering assault by those same people more than a half-century later. In a way, the revolution has come full circle.

Meet the new boss, same as the old boss.

Donald Trump is leading this revolution, and were it not for us, he’d be all alone. Okay, he’d still have the NRA and the cops and the state of Israel, but who else? Never in our nation’s history has an American president had so many powerful forces so resolutely arrayed against him: Big Tech, the media, Hollywood, the schools, the colleges and universities, the foundations, the increasingly woke large corporations, and the list goes on.

And yet Trump goes on, too.

And one wonders: Why? What’s his angle? What’s his play? He certainly didn’t do it for the money. He’s already lost, what, a billion dollars by taking on the world’s toughest and most thankless job? Heck, he’s not even drawing a salary. Previous presidents could afford to sacrifice the short-term monetary shortfall, because they knew they’d be able to make it up on the back end with book deals, Netflix contracts, speaking engagements, and the like. But the Trump brand is now toxic among the elites. What corporation would dare book him as a speaker or hold its client conference at one of his properties?

This is the thanks he’ll get for having led a rebellion against a government that’s gotten too big and too meddlesome and too oppressive, and against a culture that’s become downright hostile toward the very things that made this nation great.

Let’s be sure to show up on Tuesday. All of us. Our blue-collar president still has plenty of work to do.