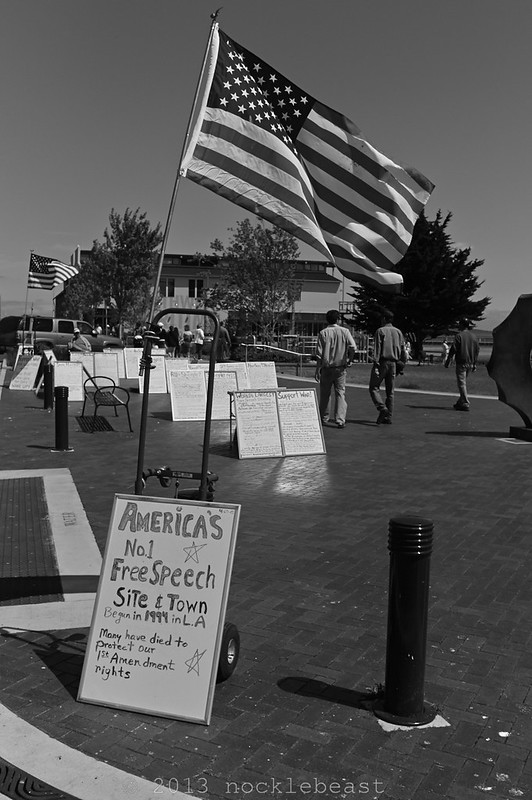 May 9, 2014Once in 1773, there was the Boston Tea Party where tons of tea was ‘covertly’ tossed into Boston Harbor. John Adams our 2nd President is attributed as the one protested against. Adams played a part in producing the Constitution with the 1st Amendment to guarantee ‘free speech rights’.241 Years later, my 42 board ‘world’s largest free speech display’ was stolen and tossed into the Port Townsend, Washington Bay!On a Sunday morning prior to the eve of April Fools day in the liberal (?) eclectic, tourist, art community of Port Townsend, Washington my continuing 20 years of ‘free speech’ displays were discovered missing from their hidden outdoor storage place near the bay. The mystery of who did it is open to conjecture while many suspect someone or one’s were paid to make them disappear with in a short few weeks of a political City Council decision to censor the ‘free speech’ effort. At the present 3 citations were served supporting new ordinances targeting me. The average of 14 hours weekly as well as the boards being displayed on 50’ of open public property that obstructed nothing was the alleged issue. The real reasons for the ordinance could have been anything other than what they alleged as a space limitation (which was limited to 4’ x 6’ and 5’ in height making the American flag in violation that flies above the display). Even my writing suggesting ‘no smoking in public downtown could have been the reason.We are a ‘blessed country’ significantly due to the rights of the 1st Amendment, and the protection by law enforcement to ensure that. Without it, countries have been known to murder those who speak out. No sane person would even do ‘free speech’ in this country without both the protection of the Constitution and the local police! As it is, it can be an exercise that can evoke fear due to rouge citizens. Free Speech takes courage to face various forms of censorship from ordinary citizens let alone politicians who should know better, and are likely protecting money interests.People put into positions of power are locked into an ongoing system likely filled with the cobwebs of deception, old boy networks, control by ‘money interests’, and more nefarious conditions than transparency can reflect openly. Most politicians fall into the jaws of ‘entitlement’ , as the opportunities for conduct that do not serve the higher conscious public welfare to serve the best interests of all constituents are forgotten.The outer, especially technology, is changing faster in more complicated ways than is the inner growth of humanity to deal with it positively. It’s now like giving ‘grownup toys’ to little children. Dangerous. Education as it is, isn’t enough. People have to be encouraged to both make inner, healthy growth a prime goal along with a social activism (such as using free speech rights) in an aware, discerning way. No longer is the state of the world one in which it works well to have the attitude of ‘apathy’, and self serving outer entertainment without making an inner and outer higher difference.